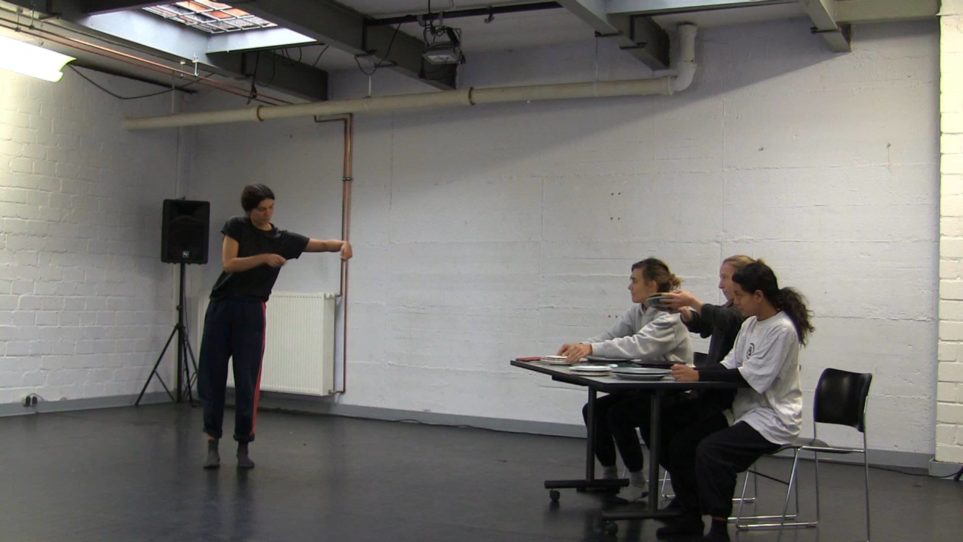 First three days we learned what foley artst do and his tools:
SYNCHRONIZATION – PRACTICE of LISTENING – FOREGROUND/BACKGROUND SOUND – PHYSICAL EMPATHY
He specifcally work for recording with:

We developed responses and physical exercises on that we saw: Sounding the acton in synchronous and developing movement response to the sound input.
Following two days;
we focused on how does he do the things and what kind of body is at work

• what does he read on the scenes
• movement of the foley artst as reducing the scale of the referred movement
• diferent approaches to synchronicity: psychological/physical empathy with the character and / or analysis (focusing on the contact points, the sounding parts, the rhythm) and we explored sound potental of the objects:
• how a plastc gloves sound like a fying bird wing…etc.

We developed responses to these two days as solo works: Using the aspects of space and the object.

WE WANT to contnue to explore further in the coming days:

Sound Sensibilizaton: How to move, touch to a material in order to have a precise sound.

What are the context of our acton? of our sounds?