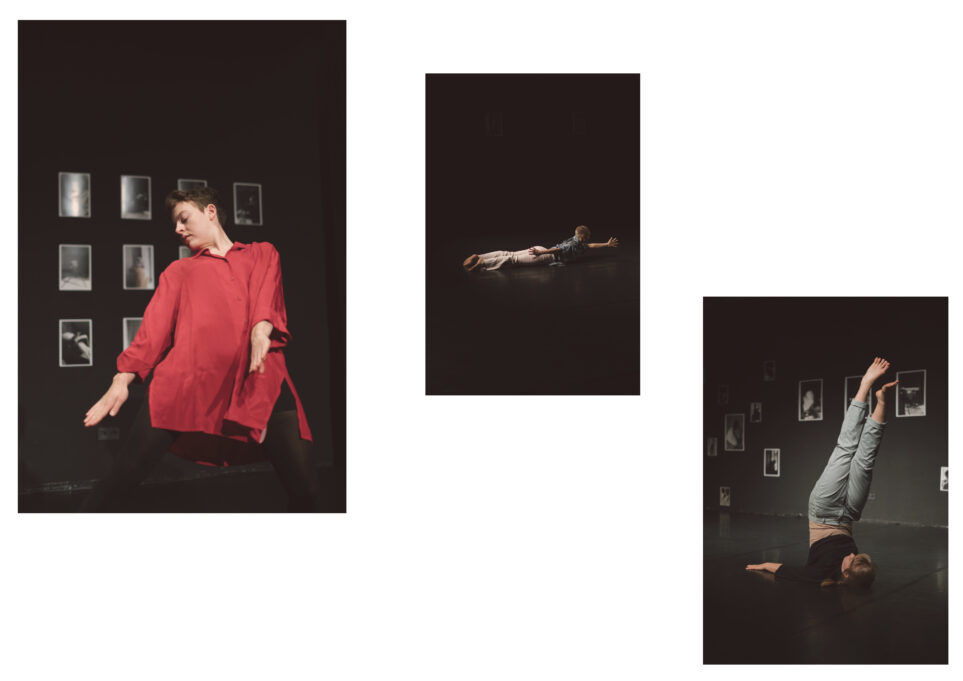 During the last week of our research, we really tried to concentrate on crystallising some ideas of how would our collective work translate to the audience? What are the ways our work could be shown/performed in a theatre space? We were wondering whether people should know of the research topic as they enter the space? What kind of elements could be part of our show if we ever made a production together? How does looking/observing/wondering through the space look like, when there are multiple points of attention in the space? Who is in the focus and why? How to direct this attention and how can it be built in the structure of the making off?
How do we make people join in the movement without explicitly announcing that? How do people behave when there is ambiguity in the space? What do people see in the photographs? How does it relate to the dance moves they have seen in the showing of the idea? Does it spark the conversation about shame?

Our goal during this week was to see whether the research that we have been doing during the previous weeks resonates a different conversation between us. We discussed extensively about the issues we have discussed and placed in practice, as well as not managed to explore deeper. Issues such as shame in public spaces and locations, positive aspects of shame in society would have required more time and involvement of other participants. We realised that there is a lot of space for future exploration, possibly narrowing the topic down. That would inevitably make us go deeper in a more diverse visual elements and more specific exploration with the movement and audience interaction.

Structure of the making off:

During the first part of the making off, Elisabeth invited the audience into the “exhibition space” without a lot of further information on the project. We entered as part of the audience and gradually started our movement sequences. We observed the reactions of the audience members and found moments of interactions with them. The space was open, everyone could be or move to every part of the room. We experimented with moving through different parts of the space, taking up space next to audience members, copying their postures and changing to dynamic dance sequences. There was a lot of tension in the room and beautiful moments happened when audience members joined some of our postures and even initiated movement on the basis of these postures. Even an eye contact was quite an intense experience, as none of the photographs have a direct eye contact.

Second part was meant to explore visible versus invisible aspects of movement, therefore we used a few narrow spotlights in the space where dancers moved in and out of light. During the dance, we used a track of spliced interview bits about shame that we conducted with people we know before the residency. The movement was derived from creating a conversation between two body parts that people found to be shameful. (During the research week, we asked university students to write some body parts on a piece of paper, that they felt ashamed of, and placed them in a bowl, so it was a chance which body part each dancer would pick from the bowl.) It was challenging to stay within the isolation of the body parts in the chosen quality and still bringing the whole body into dancing and taking up space. Staying honest in the movement and not making it beautiful or technical perfect from a dance perspective, but really understanding what images and emotions occur from it was a challenging process.

It was followed by a conversation in darkness, which was a very special moment, tense and relaxed at the same time, some people shared how they felt and what they feel ashamed of.

During the third part, we turned on the lights and invited everyone to look at the photographs once again, this time without any distraction.

It was followed by the discussion and people sharing how they felt, what they saw and asked us some questions.

The next morning we shared with Felix, Miriam and Elizabeth our experience, heard their feedback and we left feeling like we want to work more.